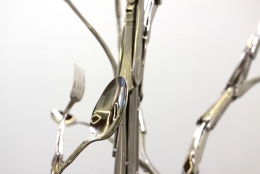 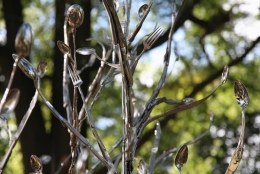 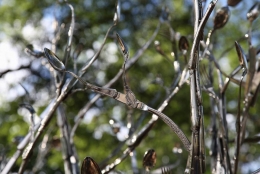 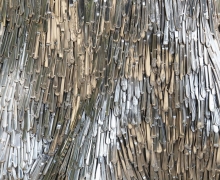 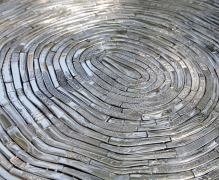 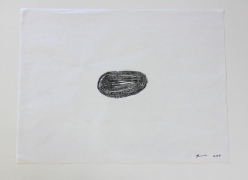 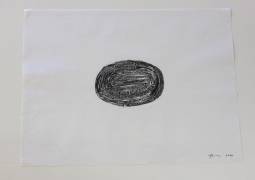 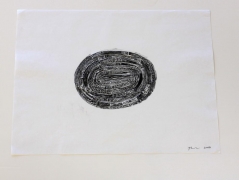 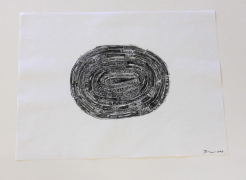 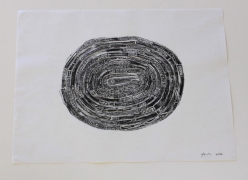 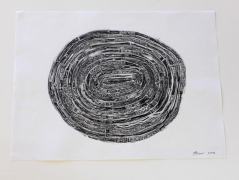 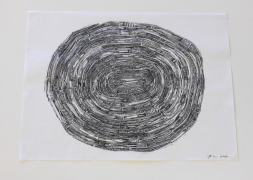 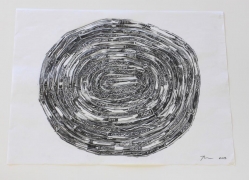 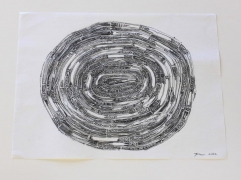 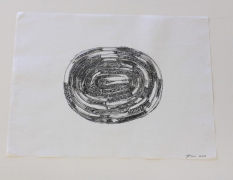 In the sculpture "Grafted Settings (Tree)," Shin investigates the history and cultural connotations of flatware. The practical, utilitarian function of the utensil serves as a cross-cultural common ground facilitating the basic human need for sustenance. Yet historically, flatware has become loaded with divisive cultural significance, evoking associations embedded with connotations of class, etiquette, and privilege. This complexity is similarly evident in her use of the tree as an object representing both utility and idealized beauty. In combination, the tree and flatware suggest a harmonious co-existence of culture and nature, while softly referencing their mutual fragility. Shin’s vivid photographs capture these domestic materials transformed into various sections of the tree. Forks, spoons and knives form delicate branches, the curves of annual rings, and textured layers of bark. These images speak to family rituals of the home, and - like a setting at the table - suggest memories both personal and communal.

Born in Seoul, South Korea and raised in the United States, Shin attended the Skowhegan School of Painting and Sculpture in 1999 and received a BFA and MS from Pratt Institute in Brooklyn. She lives and works in New York City. Her work has been widely exhibited in major national and international museums, including in solo exhibitions at the Montclair Art Museum in New Jersey (2013), the Scottsdale Museum of Contemporary Art in Arizona (2010), Smithsonian American Art Museum in Washington DC (2009), the Fabric Workshop and Museum in Philadelphia (2006), and The Museum of Modern Art in New York (2004). Other venues have been the New Museum of Contemporary Art, the Museum of Art and Design, the Museum of Fine Arts, Houston, the Museum of Fine Arts, Boston, Asia Society and Museum, The Brooklyn Museum, Sculpture Center, Socrates Sculpture Park, Frederieke Taylor Gallery and Cristin Tierney Gallery in New York City. Site-specific permanent installations have been commissioned by the US General Services Administration Art in Architecture Award, New York City’s Percent for the Arts and MTA Art for Transit as well as the City of Seattle. She has received numerous awards, including the New York Foundation for the Arts Fellowship in Architecture/Environmental Structures (2008) and Sculpture (2003), Pollock-Krasner Foundation Grant, and Louis Comfort Tiffany Foundation Biennial Art Award. The artist lives and works in Brooklyn (NY).